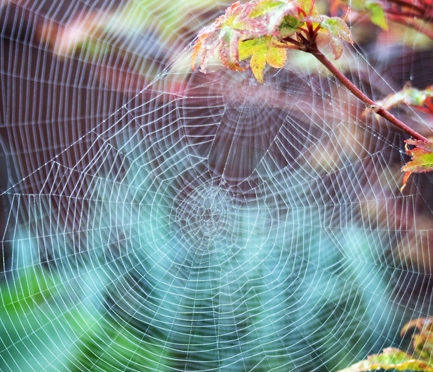 Our lives can be so busy sometimes that we don’t have the time to stop and think about the things that are going.

In this face paced world, speed and efficiency can lead to mistakes, stress and anxiety.

Slow down; take a breath; you can only do what you can do.

And that is alright.

We lead our separate lives, day to day, blinkered against what is going on around us.

But we are inextricably linked to those around us, even if those connections aren’t immediately visible.

Look up from your life, take off the blinkers and see what else is going on around you.

Okay, so a slight hiccup in the A-Z proceedings in that there is no village (or town, or city) in Somerset that begins with the letter J. So, I will skip over that, and look at K instead.

And Kingweston is the stereotype for the evolution of a village.

It’s the end of the 11th Century. You’ve supported the winning side and so, as a reward, you are given the manor of Chinwardestune. It’s good farming land, and you have a nice house there. Over time – and changes of ownership – the manor has grown strong: you have a large house, alongside which you have built a church, there are farm buildings and cottages for your workers.

And that’s it. This village, with a population of less than 150, is little more than a farm, the attached manor house and its religious building and workers cottages.

The cottages are very picturesque; higgledy-piggledy on the lane up to the manor house and farm.

Walk up the main road and you encounter the Manor House. The barrier between those that had and those that had not. A high wall rings its lands, through the trees you get a glimpse of the grandeur within, but a glimpse is all you’re going to get.

The current Kingweston House was built in the 1800s by the long-term residents, the Dickinson family. In 1946 it was bought by Millfield School and has been used by them ever since.

The Church of All Saints is of a similar age to the manor house. Set at the upper end of the village, it is an ideal space for contemplation, as it overlooks the countryside towards Glastonbury Tor.

The Commonwealth War Graves Commission suggests that Major Francis Arthur Dickinson is buried in the churchyard and, while I was unable to find his headstone, he is commemorated on the Roll of Honour in the church itself.

The plaque mentions other members of the Dickinson family who died during the Great War:

Lieutenant George Barnsfather Dickinson of the East Lancashire Regiment fell at Ypres in May 1915.

The village has, understandably, a community feel to it. Even though the farm workers have move on and been replaced by wealthier country folk, Kingweston has a heart and a draw to it.

We all have a plan, an end point we want to reach, a goal we want to accomplish.

Rome wasn’t built in a day, so prioritise the small steps needed to achieve your dreams.

You have a point to aim for, so let that be the light that guides you through. 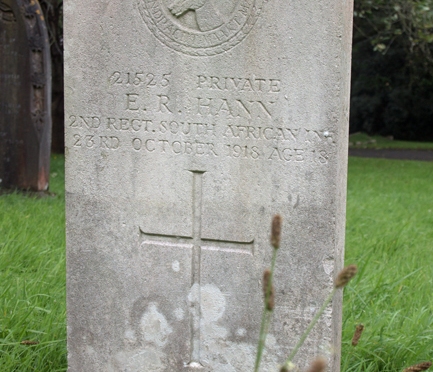 Edwin Robert Hann was born in Johannesburg, South Africa, to Albert Edward and Jemima Jane Hann in around 1900.

Research has led me to numerous dead ends regarding Edwin’s life. Hann’s tombstone shows that he enlisted in the 2nd Regiment of the South African Infantry.

The 2nd Regiment served in numerous key battled on the Western Front, including Ypres, Passchendale, Marrieres Wood and Messines. Their last major engagement was at Le Cateau in early October 1918. Given how soon afterwards Private Hann passed away, it seems possible that he was fatally wounded – or at least suffered trauma – during this battle.

His war pension records suggest that he died at a military hospital in Woking, Surrey. A little research suggests that, unless this was the medical wing of the local army barracks, then it is likely that Hann was treated at the former Brookwood Hospital (at the time known as Brookwood Asylum or the Surrey County Lunatic Asylum).

While I can find nothing concrete to confirm this, other Brookwood records suggest that fellow patients were either suffering the effects of shell shock or mustard gas. It is reasonable to assume, therefore, that Private Hann passed away as an indirect result of the fighting on the front, rather than a direct one.

A second mystery arises around his burial, however.

Born in South Africa, fighting on the Western Front, treated and passing in Surrey. How did Edwin Hann come to be buried in a cemetery in Glastonbury?

Again, I can only surmise why this poor teenager was buried so far from home. Hann is a fairly common name in Somerset and, from a bit of research on Ancestry.co.uk, at the turn of the last century there are a large number of Hanns in and around Glastonbury and Shepton Mallet, and in particular a lot of Alberts and Edwards (like Private Hann’s father). The assumption can only be, therefore, that Edwin came to be buried close to a where his father’s family lived. 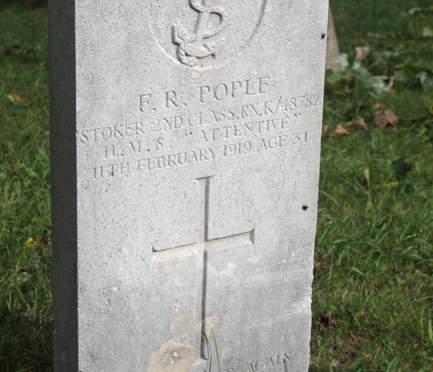 Frederick Richard Pople was the second son of Frederick and Emma Pople, born in 1887 in Street, Somerset. He married Beatrice Cox in 1910 and, by the following year the newlyweds had moved to South Wales, when Frederick wound work on the railways.

Frederick joined relatively late into the war – he was 30 when he enlisted on 25th January 1918. He training took place at HMS Vivid II in Devonport and, by March of that year, he was serving as a stoker on the HMS Attentive III, part of the Dover patrol.

Sady, Stoker Pople’s service was short-lived. While he continued to work on the HMS Attentive after the conclusion of hostilities in November 1918, passed away from pneumonia on 11th February 1919. He is buried in Glastonbury Cemetery.

Stanley John Counsell was born in September 1896 to George and Ellen, farmers in Glastonbury.

The youngest of five children, Stanley was an apprentice carpenter by the time he enlisted with his brothers Lawrence and Wilfred.

Private Counsell joined the Worcestershire Regiment in 1915 and was sent into action in France in September 1916.

He suffered medically during the war, succumbing to tonsillitis and diarrhoea during his time in France. A bout of tuberculosis in late 1918 saw Stanley shipped back to the UK and admitted to a hospital in Newcastle-upon Tyne.

The end of the Great War came and went, and Stanley was finally discharged from the army in March 1919, as he was no longer medically fit for war service.

On 2nd May 1919, less than six weeks after being discharged, Private Stanley Counsell passed away. He was a victim not of the war, but of the subsequent influenza pandemic, which killed 250,000 people in the UK alone. 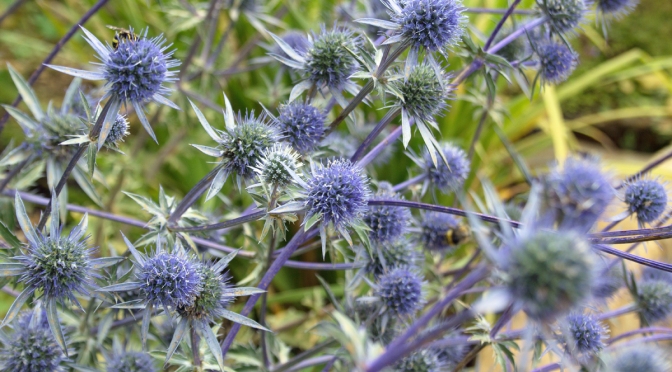 Life may seem like you’re travelling through thorny brush, but there is still beauty to be found.

Thorns and spikes are there to protect; that protection is there to help the delicate and sensitive parts of the plant.

Sometimes the perceived darkness is there for good. 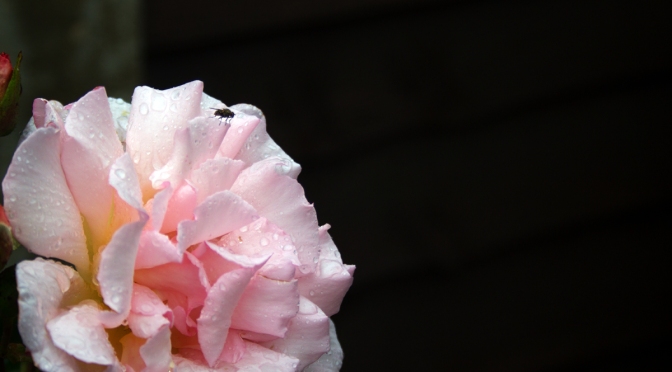 Ride the great wave of life and see where it takes you.

Amazing adventures lie in store if you just take that one step out of your comfort zone.

Why say ‘no’, when ‘yes’ is so much more positive? 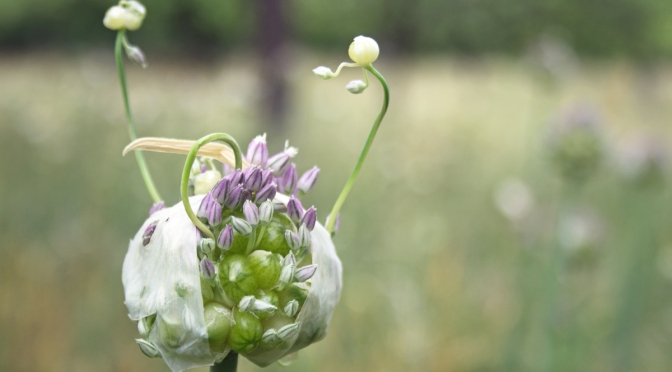 One of the beautiful things about life is that it throws the unknown and unconventional our way.

Open your arms and embrace the new.