Sidney Ralph Pragnell was the eldest of two children of Edward and Ellen Pragnell. Edward grew up in Sherborne, before moving to London to work as a chef; he found employment as a cook in an officer’s mess, which took him and his wife first to Ireland – where Sidney was born – and then to the barracks at Aldershot.

By the time of the 1911 census, Edward had brought his family back to Dorset, and was running the Half Moon Hotel, opposite the Abbey in Sherborne. Sidney, aged 12, was still at school.

When war broke out, Sidney was eager to play his part, even though he was underage. An article in the local newspaper highlights his keenness and how he progressed.

When war broke out, he was keen to serve his country and joined every local organisation his age would allow him to. He was an early member of the Sherborne VTC and Red Cross Detachment, and was actually the youngest member of the Volunteers to wear the uniform. Whilst still under age, he enlisted in the Royal Naval Division at the Crystal Palace and after a period of training was drafted as a qualified naval gunner to a merchant steamer carrying His Majesty’s mails and in this capacity went practically round the world. In February [1919] he joined the RNAS and after some air training in England went to France to an air station, where he passed all the tests with honours and gained the ‘wings’ of the qualified pilot. Lieutenant Pragnell then decided to go in for scouting and came back to England for advanced training in the special flying necessary for this qualification and it was whilst engaged in this that he met with the accident which resulted in his death.

The esteem in which Second Lieutenant Pragnell was held continues in the article, which quotes the condolence letter sent to his parents by his commander, Major Kelly.

It is with deep regret that I have to write you of the death of your son, Second-Lieutenant SR Pragnell. Your boy was one of the keenest young officers I have ever had under my command and was extremely popular with us all and his place will be extremely hard to fill.

The service can ill afford to lose officers of the type of which Lieutenant Pragnell was an excellent example and it seems such a pity this promising career was cut short when he had practically finished his training. May I convey the heartfelt sympathy of all officers and men in my command to you in this your hour of sorrow.

What I find most interesting about this article is that the letter from Major Kelly detail how Edward and Ellen’s son died, and this this too is quoted by the newspaper.

Your son had been sent up to practice formation flying and was flying around the aerodrome at about 500 feet with his engine throttled down waiting for his instruction to ‘take off’. Whiles waiting your boy tried to turn when his machine had little forward speed. This caused him to ‘stall’ and spin and from this low altitude he had no chance to recover control and his machine fell to earth just on the edge of the aerodrome and was completely wrecked. A doctor was there within a minute, but your boy had been killed instantaneously.

Further research shows that the aerodrome Second Lieutenant Pragnell was training at was RAF Freiston in Lincolnshire, which had been designated Number 4 Fighting School with the specific task of training pilots for fighting scout squadrons. He had been flying a Sopwith Camel when he died.

Second Lieutenant Sidney Ralph Pragnell lies at rest in the cemetery of his Dorset home, Sherborne.

William Larkin was born in 1863, the eldest son of Alfred and Frances Larkin from Cranbrook in Kent.

He disappears off the radar for a few censuses – there are too many variations on his surname to identify exactly where he was on the 1881 and 1891 documents.

From later documents, however, we can identify that he married Eliza in around 1886; the couple had no children. By the 1901 censes the couple were living to the north of Maidstone; ten years later, they were running the Fox & Goose pub in Weavering, Kent.

Private Larkin’s military service is also lacking in documentation, but some information can be pieced together.

Originally enlisting in the Royal West Kent Regiment, he (was) transferred over to the Royal Defence Corps, and served on home soil.

On Sunday 2nd April 1916, Lance Corporal Larkin was on guard at a gunpowder factory in Faversham, Kent. As the Ministry of Munitions reported at the time:

During the weekend a serious fire broke out in a powder factory in Kent, which led to a series of explosions in the works.

The fire, which was purely accidental, was discovered at midday and the last of the explosions took place shortly after two in the afternoon.

The approximate number of casualties is 200.

William was not killed during the incident, but Boxley Parish Council (who covered the Weavering area) carried out research on the names on the village war memorial. According to that research, William “developed cancer after the ‘Faversham Powder Works’ explosion”. He died two months later, on 8th July 1916. He was 53 years of age.

Lance Corporal William Larkin lies at rest in the graveyard of St Mary & All Saints Church in Boxley, Kent.

The 1916 explosion at Faversham was the worst in the history of the British explosives industry.

At 14:20 on Sunday 2 April 1916, a huge explosion ripped through the gunpowder mill at Uplees, near Faversham, when a store of 200 tons of trinitrotoluene (TNT) was detonated following some empty sacks catching fire. The TNT and ammonium nitrate (used to manufacture amatol) had exploded.

The weather might have contributed to the start of the fire. The previous month had been wet but had ended with a short dry spell so that by that weekend the weather was “glorious”, providing perfect conditions for heat-generated combustion.

Although not the first such disaster at Faversham’s historic munitions works, the April 1916 blast is recorded as “the worst ever in the history of the UK explosives industry”, and yet the full picture is still somewhat confused.

The reason for the fire is uncertain. And considering the quantity of explosive chemicals stored at the works – with one report indicating that a further 3,000 tons remained in nearby sheds unaffected – it is remarkable, and a tribute to those who struggled against the fire, that so much of the nation’s munitions were prevented from contributing further to the catastrophe.

(Information about the explosion drawn from Wikipedia.)

Reuben Victor Stanley Hadlow was born in the spring of 1898. He was one of thirteen children to John Charles Tarpe Hadlow and his wife Gertrude, publicans at the Star pub in Whitstable, Kent.

When war broke out, Reuben was working as a blacksmith; he enlisted in the army in the summer of 1914, serving on the home front.

In February 1916 Private Hadlow transferred to the Royal Flying Corps as a Air Mechanic 2nd Class, and was assigned to the 65 Training Squadron in Croydon. He was promoted to Air Mechanic 1st Class six months later.

When the RFC became the Royal Air Force, Air Mechanic Hadlow moved across to the new institution. He moved to support 156 Squadron in November 1918, then the 35 Training Depot Station shortly after.

Air Mechanic Hadlow contracted phthisis (tuberculosis) towards the end of that year, which led to his being discharged from the RAF on 22nd January 1919.

Reuben’s health did not recover after returning home – his parents were running the King’s Arms pub in Boxley near Maidstone by this point. He passed away on 17th September 1919, aged twenty-one.

He lies at rest in the churchyard of St Mary and All Saints, in his parent’s village.

Poignantly, his gravestone is not a traditional war grave. Instead it states that he died “after a painful illness and serving his country 4 1/2 years”.

Time is not on our side; there is no way to stop it or slow it down.

Life is short, use it wisely.

Arthur Palmer was born in Bicester in 1889 to groomsman George Palmer and his wife Annie. Arthur was the eldest of five children, five boys and one girl.

By 1911, the family had moved to Dorset, where George continued to work as a groom. His son, Arthur, had also gone into domestic service, and was a footman. Presumably this was under the same employ as his father, although the records do not confirm this.

This is where the trail for Arthur Palmer dries up.

From his gravestone, we know he served in the Machine Gun Corps (MGC). The Register of Soldiers’ Effects confirms he was in the 3rd Company; this was formed in January 1916, so Private Palmer can only have enlisted after that date.

Online research only brings up MGC military service records for an Arthur George Palmer, who lived in Kettering. However, this Private survived the war, so could not be the one buried in Dorset. There is nothing in contemporary newspapers to suggest that there was anything untoward or unusual about his passing.

All I can say for certain is that Private Arthur Palmer died at the Cannock Chase Military Hospital on 13th November 1918.

He lies at rest in Sherborne Cemetery, Dorset. He was 30 years old.

There is no point in hiding your light under a bushel; your skills will be important to someone.

Shine a light on them and let your hard work pay off. 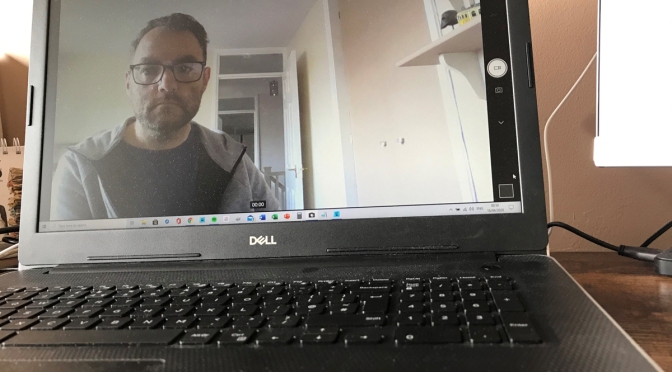 Introverts of the world unite! Our time has come!

With everything that’s going on at the moment, connecting with people, keeping up communication with friends, family and loved ones has never been more important.

I will be honest, I am quite introverted. I am more than happy with my own company and I find social events (you know, the type we used to have, seeing people face to face in restaurants, pubs, bars or at their houses) tiring.

But you can always have too much of a good thing, and online socialising was the way forward. It’s not something I have ever tried, but, in these unprecedented times (how common a phrase is that now?), new adventures and experiences await!

It’s an odd feeling, sitting in your lounge chatting to other people in theirs, as you ‘share’ glasses of wine, beer or cups of tea. Once you’ve made it past any technological hurdles and connectivity, I found you can quickly see beyond the screens.

We are getting used to a new normal, but doing so with a glass of something nice from our own sofas, chatting with friends who are doing the same isn’t a bad way of doing that!

Another quick reminder about the May’s Mass Observation Project!

Take a photograph based that sums up the theme COLOUR to you, however you want to interpret it.