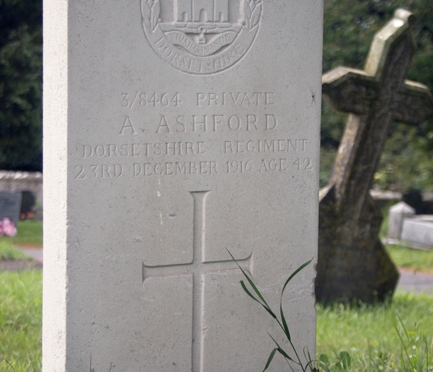 Arthur James Ashford was born in the Dorset village of Okeford Fitzpaine, to John and Tryphina Ahford. His father died when Arthur was only seven years old, leaving Tryphina to raise him and his three siblings.

Arthur had had a military career before the start of the Great War. He had enlisted into the Dorsetshire Regiment in 1891 and, while I have not been able to locate his records from that time, the regiment had been stationed in Ireland in the 1890s.

In 1899 he married Amy Upshall, at which point he was employed as a labourer. The couple had six children, though sadly, two of them – Arthur George and Elsie May – died in childhood.

He enlisted within months of the First World War beginning, returning to the Dorsetshire Regiment he had previously served on 30th September 1914. (It is interesting that on his enlistment papers he said that he had previously served for 12 years, although the dates don’t fully tally up.) This time, however, Private Ashford served on the Home Front, in Dorchester and Portland.

On the evening of 22nd December 1916, Arthur fell down a gulley in Portland. He was taken to the Verne Military Hospital in the town, but died of his injuries – a fractured skull – in the early hours of the following day.

Private Arthur Ashford was buried in his home village of Evercreech on Thursday 28th December 1916.