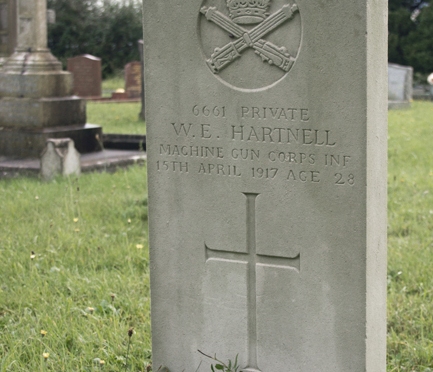 Walter Ernest Hartnell was born in 1888 to William and Jane Hartnell in Charlton Musgrove, on the outskirts of Wincanton in Somerset.

One of eight children, it appears he could have been a bit of a tearaway in his youth; in October 1905, the Shepton Mallet Journal reports on a “Hobbledehoy Nuisance” in Evercreech, when a Walter Hartnell was caught with nine of his friends causing a disturbance close to the church.

They were shouting, racing after each other up and down the road, using obscene language, and smoking cigarettes. This continued till 7.15, about half an hour.

Hartnell was fined 5/- and 2/6 costs, or would face ten days in prison.

Things looked up for Walter and, by the time his call to enlist came, he was working on the railways. He joined the Infantry branch of the Machine Gun Corps (MGC), while his brother Fred fought in the Royal Artillery.

The MGC was a particularly brutal part of the armed forces. Of the 170,500 officers and men who served in the corps, 62,049 became casualties, including 12,498 killed, earning it the nickname ‘the Suicide Club’.

Details of Private Hartnell’s death are sketchy; his company saw action at Ypres and Arras. However, records suggest that he died in Colchester; the Military Hospital there was used to dealing with troops straight from the Front. It is likely that he was injured at Ypres and shipped back home to recuperate, but died of his injuries.

This is all conjecture on my part, of course, but either way, Private Walter Hartnell lies at peace in a quiet Somerset cemetery.