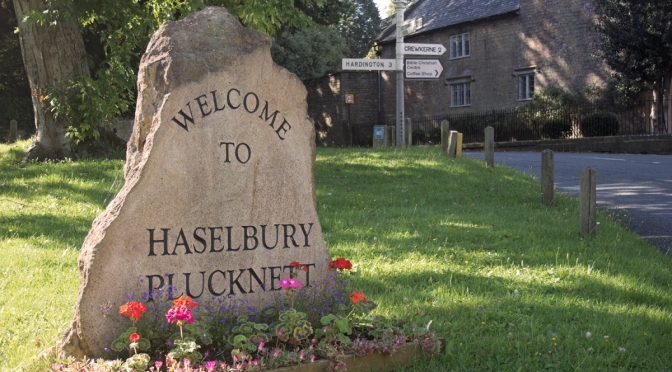 In the south of the county of Somerset, almost at the border with Dorset, lies the enchantingly named Haselbury Plucknett. Lying three miles (5km) to the east of Crewkerne, the name literally means “(Alan de) Plugenet’s hazel grove”. A somewhat busy road runs through the village, but this does not detract from its charm.

The cottages in the centre of the village are built of local stone and face the village green. They’re well-attended and give the village a real sense of community, something that was in evidence as I roamed around.

Just down from the village green are the Jared Gear Almshouses, set aside to provide safe and secure housing accommodation for people with limited financial resources who have connections with Haselbury Plucknett.

Wulfric of Haselbury was a noted resident of the village. In 1125 he moved there from Compton Martin, just south of Bristol, in pursuit of a wholly religious life. He withdrew from secular matters almost completely, living in a cell adjacent to the village church, St Michael and All Angels. Wulfric’s piety attracted notable well-wishers; King Henry I and King Stephen both sought his advice and he became well renowned not just around Somerset, but also at court. When he died in 1154, he was buried in the church.

The village church lies just off from the centre and, like the village itself, is a tranquil place. There are no Commonwealth War Graves in the churchyard, but the War Memorial commemorates the twelve Haselbury souls who gave their lives on the field of battle during the Great War.

One of those remembered was Harry Shyer. He was just 20 years and 3 days old when the ship he was serving on – the HMS Good Hope – was torpedoed off the coast of Chile during the Battle of Coronel. All hands from the ship were lost, a total of 926 men.

The war memorial includes two sets of brothers: John and William Eastment and George and Harold Tout. Given the population of Haselbury Plucknett was less than 500 at 1911 census, the war must have taken an incredible toll on the village and the twenty-two losses would have been felt.

Two other key parts of the village lie within 300ft (90m) of each other; the local school and the village pub. (I make no assumptions as to their location, other than Haselbury Plucknett being a small village!)