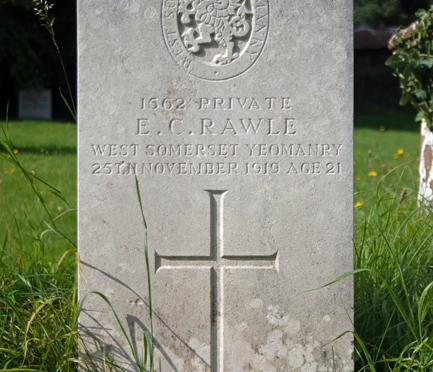 Ernest Charles Rawle was born in 1894, the fourth son of George Rawle, a sailor, and Louisa, his wife.

It has not been easy to find information on his war service. What I have been able to ascertain is that Ernest was still at school at the time of the 1911 census, and enlisted in the West Somerset Yeomanry.

He was discharged with a disability on 23rd May 1919, passing just six month later. He was just 21 years old.

Private Ernest Rawle lies at peace in the churchyard of Lydeard St Lawrence, alongside his two brothers, Stephen and William.