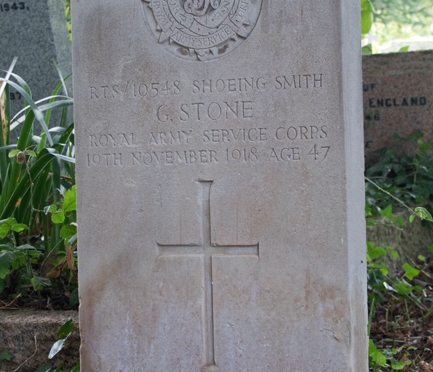 George Henry Stone was born in 1872, son of Milverton’s blacksmith James Stone and his wife Mary Ann. He followed in his father’s footsteps and, by the time he married Mary Florence Paul in 1894, he was also working in the forge in Milverton.

George and Mary had eight children – seven girls and one boy; by the time he signed up in 1915, he listed himself as a blacksmith.

His military records show that he was medically certified as Category B2 (suitable to serve in France, and able to walk 5 miles, see and hear sufficiently for ordinary purposes). He was assigned to the Remount Depot in Swaythling, Southhampton, which was built specifically to supply horses and mules for war service. (In the years it was operating, Swaythling processed some 400,000 animals, as well as channelling 25,000 servicemen to the Front.)

While serving George contracted pneumonia. He was treated in Netley Military Hospital, but passed away on 19th November 1918, aged 47.

Shoesmith George Henry Stone lies at peace in a quiet corner of St Michael & All Angel’s churchyard in his home village of Milverton.