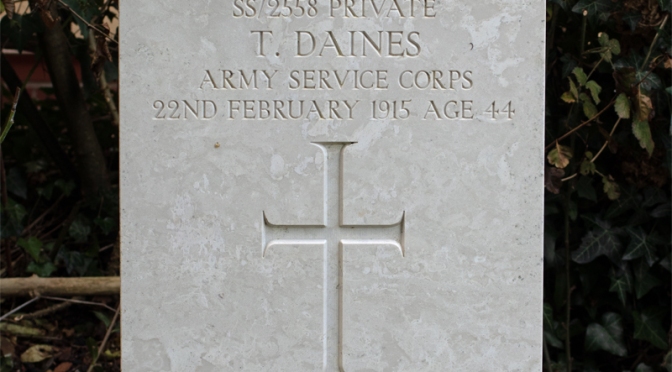 Born in 1871, Thomas Daines was one of fourteen children. His parents, Charles and Sarah, worked on a farm a few miles from Halstead in Essex.

After leaving school, Thomas followed in his father’s footsteps and, by the time of the 1891 census was also listed as an agricultural labourer. He married Kate Rawlinson in the spring of 1893, and they had two children – Matilda and Lewis – before relocating to South East London in around 1898.

The reason for the move was, more than like, job opportunities, and Thomas was soon working at the Royal Arsenal in Woolwich.

Settling into their new city life, Thomas and Kate had five further children: Annie, Thomas, Alfred, Charles and Beatrice. Thomas continued as a labourer, before enlisting in the army within three months of war being declared in October 1914.

Sadly, Private Daines’ service was not be be a long one. Having suffered a bout of influenza, Thomas was admitted to a Red Cross Hospital in Sherborne, Dorset. He died of pneumonia on 22nd February 2015.

Private Thomas Daines lies at peace in the Sherborne Cemetery.

As a sad aside to Thomas and Kate’s story, their eldest son, Lewis, enlisted in the 16th Battalion of the Lancashire Fusiliers. He fought on the Western Front, and was killed in action in Pozières on 26th March 1918.

The Great War had claimed father and son.

Samuel Cook was born in Bedfordshire, the eldest of two children to Alfred and Phoebe Cook.

Alfred was a forester, which saw the family move around the country; the 1881 census found them living in Rutland, ten years later the family was recorded in Northamptonshire and by the 1911 census, they were in Dorset.

Samuel was quick to follow in his father’s footsteps, supporting his mother and sister after Alfred died in 1906.

The was was underway when Samuel was called up. His service records show that he enlisted on 11th December 1915. His fitness seemed to have determined the path his military career would take.

Initially Private Cook was classified as C1 (free from serious organic diseases and able to serve in garrisons at home, able to walk 5 miles, see to shoot with glasses, and hear well), but was upgraded to B2 within six months. This identified that he was free from serious organic diseases, able to stand service on lines of communication in France, or in garrisons in the tropics and able to walk 5 miles, see and hear sufficiently for ordinary purposes.

Samuel was first enrolled in 13th (Works) Battalion of the Devonshire Regiment, before being transferred to the 311th (HS) Labour Company in Plymouth.

Private Cook was one of the thousands of soldiers who contracted influenza and subsequently died of pneumonia on 1st November 1918.

There seems to be some dispute over how and when Samuel fell ill. A request for a detailed medical report was sent, “as he appeared to have contracted the disease from which he died whilst on leave for the purpose of getting married”. The same request confirms that he was never admitted to hospital while in the company. (There are no records oh Samuel having married, so I am assuming that his leave may have been for wedding preparations, of normal leave.)

The report came back confirming that he has died from “pneumonia complicating influenza which was contracted whilst on service at Beaulieu”.

However and wherever it happened, the disease claimed Private Samuel Cook’s life; he lies at rest in Sherborne Cemetery, Dorset.

Dorothy Louise Stacey was born in 1893, the eldest child of Alfred Stacey, a farmer, and his wife Mary.

The family lived at Middle Farm in Charlton Horethorne, a small village midway between Sherborne and Wincanton. Alfred Stacey ran the farm, and by the time of the 1901 census, the family of four had a live-in domestic servant, Beatrice Baker.

Things had moved on by the next census return of 1911. Alfred and Mary had moved the young family 150 miles east, where they were now running Buttons Farm in Wadhurst, East Sussex. I can find no familial link for what would have been a significant move in the early 1900s, but it may be that Alfred was headhunted. The records show that Mary and Dorothy were assisting Alfred in running the farm, along with new domestic servant Mary Hide. The family were joined by Marjorie Anderson, a live-in governess for younger daughter Mollie.

Dorothy Stacey joined the Queen Alexandra’s Imperial Military Nursing Service Reserves (QAIMNS) during the war. The official female unit for medical services in the British Army, those joining had to come from ‘good families’ and be qualified nurses. It can only be assumed, therefore, that Dorothy undertook additional training after 1911, presumably in order for her to be able to join up.

Unfortunately, I have not been able to find any specific information regarding Staff Nurse Stacey’s service. The QAIMNS worked both on the home front and in France, but it is likely that Dorothy remained on home soil.

The cause of Dorothy’s passing also remains lost. She does not come up in newspaper records of the time, and, given the wide range of diseases that nurses would have encountered at the time, it is likely that she contracted something like influenza or dysentery.

Staff Nurse Dorothy Louise Stacey died in Wareham, Dorset, on 5th October 1918, just a month before the end of the Great War. She lies at rest in Sherborne Cemetery.

Frederick Batson was born in Sherborne in 1888, the eighth child of Cornelius and Mary Ann Batson.

Far too young, Frederick was an orphan as Cornelius died when he was just a year old; Mary Ann passed away in 1906, when he was 18.

There was positive news on the horizon, however; in January 1909, Fred married Elsie Frances Marshallsea and by the time of the 1911 census, the couple were living in Sherborne and had a year old daughter, Eveline. Fred was working as a carpenter and journeyman and the young couple went on to have three further children.

Rifleman Batson enlisted in the Prince of Wales Volunteers (South Lancashire Regiment) in 1916. This battalion fought on the Western Front during the Great War, and was involved in both Ypres, the Somme and Passchendaele.

It is not clear whether Frederick was involved in these battles. Back on home soil, he was admitted to a military hospital in Newport, South Wales, and passed away on 22nd March 1918, following an illness.

Rifleman Frederick Batson lies at rest in Sherborne Cemetery, reunited with his parents.

Cecil John Paine was born in Sherborne, Dorset, in May 1899, the son of John and Emily Paine. He was the fifth of seven children, and the second son.

Cecil’s military records are sparse, but the local newspaper provides more information. According to the Western Gazette, Cecil joined up on reaching his 18th year, and had only been in service for three weeks, when he succumbed to pneumonia at Chiseldon Camp in Wiltshire.

As an aside, Chiseldon Camp was initially set up to train new soldiers. In 1915, part of it was developed into a hospital for wounded soldiers before, in 1916, it began to treat soldiers coming back from the front who had contracted VD. Interesting times that Private Paine probably knew little about.

Cecil’s eldest brother, Frederick William Paine also served in the Great War. He had enlisted in the navy in 1903, initially for 12 years, but continued on and was finally discharged in 1919.

Charles William Stodgell was born in 1878, the eldest son of Samuel and Mary Stodgell. His father was an agricultural labourer, while his mother was a glover. Charles followed into farm work, becoming a carter by time of the 1901 census.

Charles married Mabel Duke in 1898 and the young couple had two daughters – Ida and Florence – in the following few years.

When war came, Charles was called up. He enlisted in June 1916, joining the Devonshire Regiment before being transferred to the Agricultural Company. His record shows that he stood at 5ft 6ins (1.67m) and weighed 10st 2lbs (64kg) and his build, health and experience is probably why he ended up in service where he did.

Private Stodgell was demobbed at the end of the war, and returned home on furlough (a word not just linked to everything 2020 has thrown at us!). Sadly, before he was fully demobbed, he contracted influenza, and died on 2nd February 1919.

Charles William Stodgell lies at rest in his home village of North Curry, in the churchyard of St Peter & St Paul.

Stanley John Counsell was born in September 1896 to George and Ellen, farmers in Glastonbury.

The youngest of five children, Stanley was an apprentice carpenter by the time he enlisted with his brothers Lawrence and Wilfred.

Private Counsell joined the Worcestershire Regiment in 1915 and was sent into action in France in September 1916.

He suffered medically during the war, succumbing to tonsillitis and diarrhoea during his time in France. A bout of tuberculosis in late 1918 saw Stanley shipped back to the UK and admitted to a hospital in Newcastle-upon Tyne.

The end of the Great War came and went, and Stanley was finally discharged from the army in March 1919, as he was no longer medically fit for war service.

On 2nd May 1919, less than six weeks after being discharged, Private Stanley Counsell passed away. He was a victim not of the war, but of the subsequent influenza pandemic, which killed 250,000 people in the UK alone.